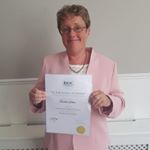 This is a picture of me in my pink suit holding a certificate, on the day I qualified as a family celebrant last September.

Celebrancy is a funny profession. It’s both very old and very new. There have been ceremonies since the beginning of time, and there have been people who were given the role of officiating them. In recent years, as organised religion declines in many countries, the role of ceremony officiant is being given recognition again.

But because celebrancy is only just being recognised again as a profession, there are lots of loopholes. Anyone can set themselves up as a celebrant without training. I did a baby naming ceremony in September 2018 before I even knew there was such a thing as a celebrant, and I could have started a celebrancy business the next day.

I can’t lie. I was really tempted to tell the world I was now a celebrant – I was so bursting with joy after the baby naming ceremony. But I felt it was important to be equipped with the proper skills, so I could deliver ceremonies that were professional as well as fun.

I did my research and decided the courses offered by the Irish Institute of Celebrants (IIOC) fit the bill. They would give me total freedom to deliver the ceremonies that people wanted. I could be as creative, as spiritual, as passionate and as outrageous as I wanted. That was important to me.

You’ll find out more about me and what kind of celebrant I am here.

Naturally there are differences between the two courses. The funeral celebrant course prepares you for dealing with people in a heightened state of grief, while the family ceremony shows you how to bring joy into people’s lives with your ceremonies. But there were skills I learned which were common to both.

There’s a strong element of performance in the course, and we had several sessions showing us how to use our voices to deliver a great performance. Trained actors showed us how to breathe correctly and how to control our voices so that nerves wouldn’t get in the way.

We did tongue twisters to stop us from tripping over tricky consonants. The tutor also showed us how to manage the pace of our delivery and gave us tricks to help us deliver our ceremonies with meaning and passion.

Ritual is a hugely important part of ceremonies. They’re powerful symbols of life and of love. We learned about the meaning and origins of some of the most popular rituals, like the Celtic handfasting carried out at weddings. We also learned to carry out those rituals.

We tied ribbons around each other’s hands and we lit candles. We also learned about where to stand during a ritual and how to direct the people taking part. We kept practising until the rituals felt natural and we could carry them out seamlessly.

The thing that makes the IIOC celebrant courses stand out is the emphasis on storytelling. We learned to create unique ceremonies for each family we work with. On both courses, there was a module on storytelling, to help us craft and deliver these unique stories.

On the wedding course, we learned to write love stories for couples that captured the special moments in their relationship, from first meeting to proposal. And on the funeral course, we learned how to write eulogies, love stories of a different kinds. Eulogies are stories that capture the essence of the person who has passed away and allow the families to express their love for that person, one last time.

Though the IIOC celebrant courses aren’t business courses, we did learn how to develop a relationship with people we worked with and how to collaborate with them to create our ceremonies.

We did mock consultation sessions, where we played the part of a client and a celebrant. We asked each other questions to find out what ceremony the person would like. This was particularly challenging during the funeral course, when we learned how to consult with clients in fraught situations.

After all these modules were finished, it was time for our final assessment, and that assessment took the form of a ceremony. For our wedding ceremony, we were given the name of a couple and told to write a ceremony for them.

The funeral ceremony process was interesting. To give us experience of how a funeral would happen in real time, we had to write and deliver a funeral ceremony within three days. We did a consultation session with an actor playing the part of a bereaved person.

From the information we gathered at the consultation, we wrote a draft ceremony within twenty-four hours. Then we rehearsed and delivered that ceremony, in an empty room with just the examiners at the other end. After that, delivering a ‘real’ funeral will be easy!

Overall, I’m glad I completed my celebrant training. I feel I’m equipped to deal with my clients and to cope with whatever glitches arise. The fact that I’ve invested time and money to become a better celebrant builds trust. And I can show people that I have the skills to deliver the ceremony of their dreams.